The songs of the Remede de Fortune

The Remede includes seven songs, which are copied with their music in most of the main Machaut manuscripts.  (An eighth lyric poem, labeled “priere” or prayer, appears without music.)  These songs help tell the story of the narrator’s development, as he not only learns how to love properly, but how to create poetry and music in the new style represented by the formes fixes of ballade, virelai, and rondeau.  They also exemplify his move from what Sylvia Huot has called “a poetics of desire...to one of hope” (Huot 2002, 172).

The songs move from the longest and most poetically complicated to the shortest and simplest, but in terms of musical style the move is from simpler monophonic genres to polyphonic songs using the rhythmic innovations available in the latest notational style.  These newer, more complex musical styles are, on the other hand, based on refrain structures that come from lower-register or popularizing dance genres.  Machaut begins, however, with the older monophonic style of the lai and with strophic forms such as the complainte.

In what follows, each song title links to a performance on YouTube, and each manuscript reference is linked to the first page of the song's appearance in MS C.

Lai:  Qui n'aroit autre deport (MS C ff. 26r-28r)
This genre is distinct from most other types of song, which usually use strophic form, where all stanzas of text use the same melody.  The lai is rather based on the principle of paired verses, similar to that found in the sequence, a type of chant, where one pair will share poetic structure and melody but may have a different poetic and musical structure than the next.  The result can be diagrammed as:  aa bb cc....

The lai is a monophonic song type, with a single melodic line.  Four of Machaut’s lais, however, include successive or “hidden” polyphony, created by either reading the music as a round (“chace”) or by combining the melodies for different stanzas or parts of stanzas.  Machaut also uses a mensural notation that expresses rhythmic values precisely; this type of notation was not available to early creators of lais.

Lais can be found from the twelfth century, but Machaut was one of the last practitioners of this type of song.  His example in the Remede, Qui n’aroit autre deport, is fairly typical of his lais:  twelve stanzas, with the last using the poetic form and music of the first, transposed up a perfect fifth.  This provides both a sense of rounding, by returning to the opening music, and climax or progression, by shifting it to a higher register.  The music thus has a total range of nearly two octaves, which along with the length of the song requires great skill to sing (as well as to compose).

Each stanza (except the first and last) has a different poetic form, and therefore a different melody.  The stanzas are, however, divided into two identical sections that use the same melody; this particular lai actually divides each stanza save the first and last further into half-stanzas, creating four sections.  In these cases, the music of the first and third sections ends on a different pitch than the second and fourth, allowing an alternation of “open” and “closed” cadences.  This creates the following structure:

The use of a lai at this point in the story tells us that the young narrator is skilled in the creation of poetry and music, even if his efforts are rather misdirected toward this old-fashioned style.  Furthermore, as William Calin and Lawrence Earp have shown in their detailed study, the lai performs aspects of both evolution or growth and circularity, so here it both shows the narrator’s potential for growth in love (to some degree even foreshadowing future events through its references to Espoir, or Hope) and leaves him where he began.

Finally, it should be remembered that this lai is not only an insertion into the story:  it is in a sense the song that generates the story, since it is the act of making and singing the lai that makes the Lady ask the narrator who created it, which leads to his panic and flight to the garden, where he complains about Fortune and encounters Hope. 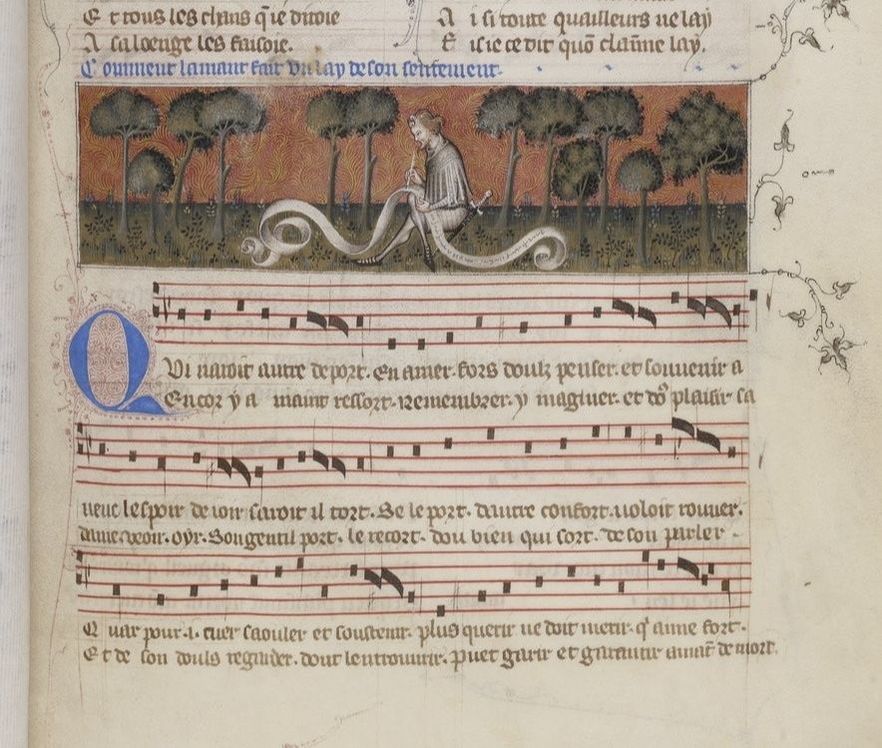 This and the other images on this page come from the digitized version of Machaut MS C transmitted in Gallica (gallica.bnf.fr).
Complainte:  Tels rit au main (MS C ff. 30r-35r)
The complainte is a vernacular version of the planctus, a lament whose roots go back to the ninth century and is closely related to the sequence and the lai.  Love complaints (complaints d’amour) appear from the twelfth century, but the most important type at this time is the planctus Beatae Virginis Mariae, which could be in Latin or the vernacular.  This is a very archaic form for Machaut’s Lover to use in his complaint against Fortune, and this may signal how out of touch he is with how he should be acting.  This song is strophic, rather than using the parallel-versicle form of the lai and sequence, and each of its two internal sections is repeated.  Since the compainte has a total of 36 stanzas, that means each segment of music is sung a total of 72 times, and this excessive repetition can provide us with further insight into the Lover’s obsession with expressing the wrong done to him by Fortune.

Chant royal:  Joye, plaisance (MS C ff. 39r-v)
This is not a standard form, but a term given to a small group of songs in the thirteenth and fourteenth centuries.  These songs use the same form as the ballade (a a b), but without refrain and with an envoi, the short final stanza typical of troubadour and trouvère song.  As a backward-looking monophonic song, Joye, plaisance is something Hope can use to communicate with the Lover, who has become stuck in obsolete styles, but, because it also uses the form of the modern ballade, she can begin to draw him out of his current state toward more appropriate forms of song, and of loving.

Baladelle:  En amer a douce vie (MS C ff. 46r-v)
The ballade is one of the fourteenth-century formes fixes, the fixed forms used for the polyphonic secular song made popular by Machaut and his contemporaries.  Hope’s example shows what is possible:  three stanzas with refrain, each using the musical form a a’ b.  Here the B section is in fact also divided, so strictly speaking the form is a a’ b b’ (R).  It may be significant that this therefore uses the same musical form as the chant royal, but here with a refrain and without an envoi.

The music is in four parts, but it has been suggested that the triplum and contratenor are alternatives, so the manuscript provides two different versions:  triplum-cantus-tenor or cantus-tenor-contratenor.  This would be in keeping with Hope’s bridging effort, since the use of a triplum was already fading from the polyphonic secular song, as something more in keeping with the motet, while the three-voice texture with contratenor would soon become the standard.  Rebecca Baltzer notes that this may well be Machaut’s first song to use a contratenor, and, while she admits various performance possibilities, she admits the three-voice performance with contratenor sounds best to her ear (Machaut 1988, 440). 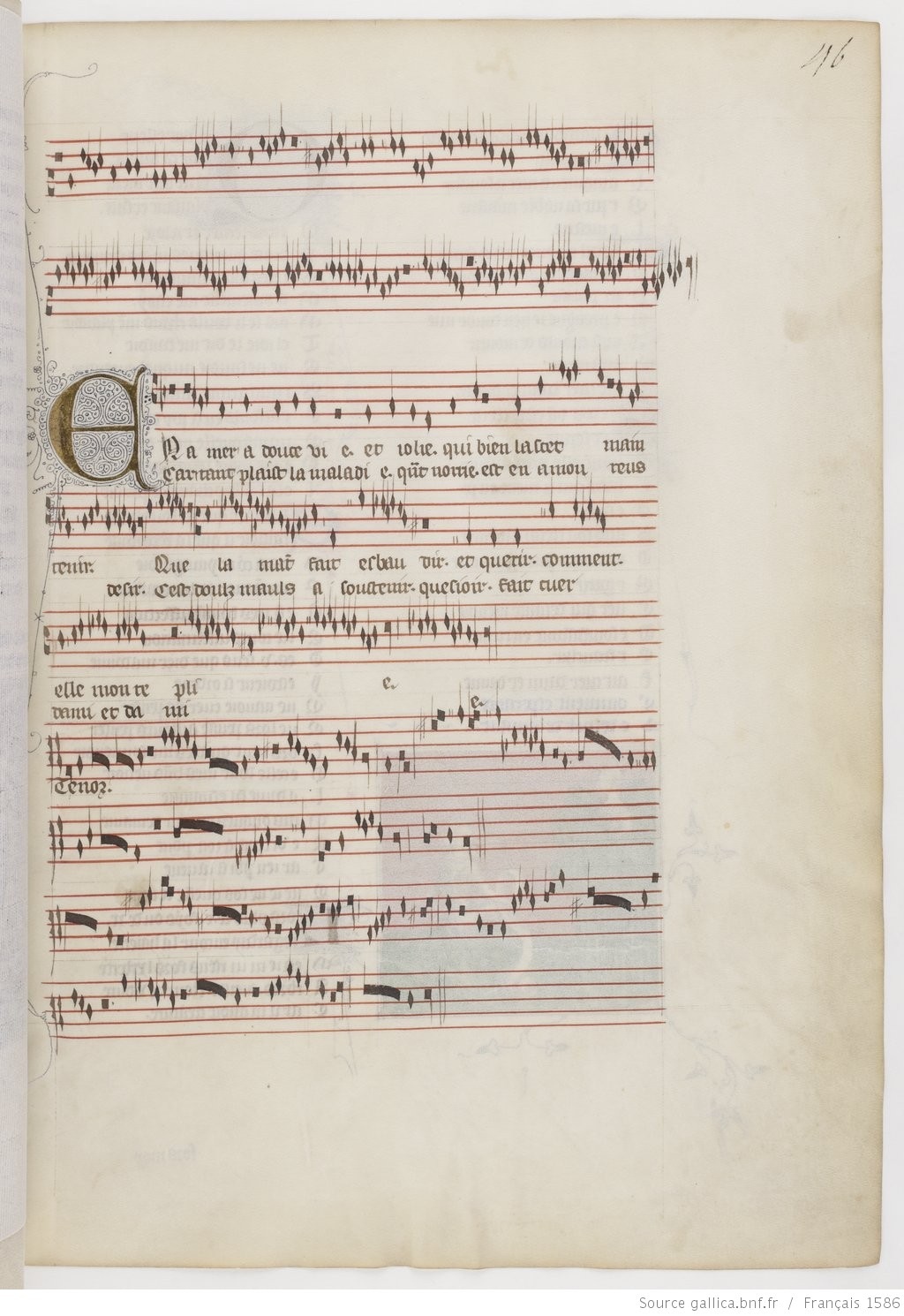 Ballade:  Dame de qui toute ma joye vient (MS C ff. 47v-48r)
The Lover’s first attempt to write a polyphonic song in the fixed forms uses the ballade form Hope has given him, but he sensibly uses only two voices, the cantus and tenor that are at the heart of this style.  (Later sources add a triplum and contratenor to this pair.)  His form is the standard a a b (R), in three stanzas.  Interestingly, the final sonority uses a minor third, rather than the perfect consonance normally required at this point.  Perhaps it is meant to give a sense of incompleteness?

Priere (MS C ff. 49r-50r)
This piece of lyric poetry is not set to music, though like the musical interpolations its beginning is marked by a miniature and it is set apart both visually (by a blank line at beginning and end) and in the narrative, by a reference to beginning, then ending, the prayer.  It consists of twelve stanzas, each divided into two halves; each half stanza ends with a short line with a single rhyme (-ance / -ence).  Its structure therefore evokes aspects of both the lai and the complainte, and like them it would presumably be monophonic if it were set to music—but it isn’t.  Margaret Switten (cited in Brownlee 1991, 24 n. 17) suggests that the reason for this may be because the “new art” should not be used to express sadness, but to me the prayer speaks more of hope and sufficiency (its final word) than of suffering (which is for the most part firmly placed in past tense), so that argument seems insufficient.  In musical terms, and possibly poetic ones as well, moving to a monophonic strophic song would be seen (or rather heard) as a backward move, to a genre that is now becoming obsolete, so that may be a factor.

Chanson baladee (Virelai):  Dame a vous sans retollir (MS C ff. 51r-v)
This fixed form most closely retains its origin in the dance, and indeed Machaut’s example serves to accompany the dance within the story.  This dance association may be one reason why virelais are often still monophonic in the fourteenth century, as here—but it is worth noting that this is an appropriate use of monophony, as opposed to the Lover’s earlier efforts.  Machaut’s melody is full of lively rhythmic motion, including frequent alternation of iambic and trochaic (second- and first-mode) rhythms.  The virelai form, A b b a A, features a refrain that lends itself to group participation, alternating with solo verses, three in all.

Rondelet:  Dame mon cuer en vous remaint (MS C f. 57r)
The rondeau is in some ways the most sophisticated of the fixed forms, so it is fitting that the Lover should write one only now, when he has become more adept in the new style.  This example is in three parts, with triplum, but Baltzer suggests that the triplum is actually a rather poor fit for what she sees as the “skillful duet” (446) of the cantus-tenor pair; certainly it is less up-to-date in style than a contratenor would be.  Does this reflect the Lover’s still-developing skill, and perhaps even foreshadow the mistakes he will continue to make in his relationship with the Lady?  The song uses the standard form (AB a A ab AB), but without the musical rhyme between the A and B sections that becomes the norm in Machaut’s output.  This may be because it is an early example—as Baltzer points out, probably his first—or it may again suggest that the Lover has more to learn to master the style.

Calin and Earp note that the rondeau, like the lai, is both a linear and a circular form, which means that the sequence of songs throughout the Remede in a sense both moves progressively through the different genres and turns back upon itself.  The circularity, as Calin and Earp note, is further reflected in Fortune’s wheel, in the ring Hope gives the narrator (which he later exchanges for the Lady’s ring), and even in the circular wall of the garden where Hope comes to educate the narrator.  This, like the equivocal ending of the narrative itself, may suggest to us that, while the narrator appears to have become a mature lover, he may not have completely grown out of his earlier errors. 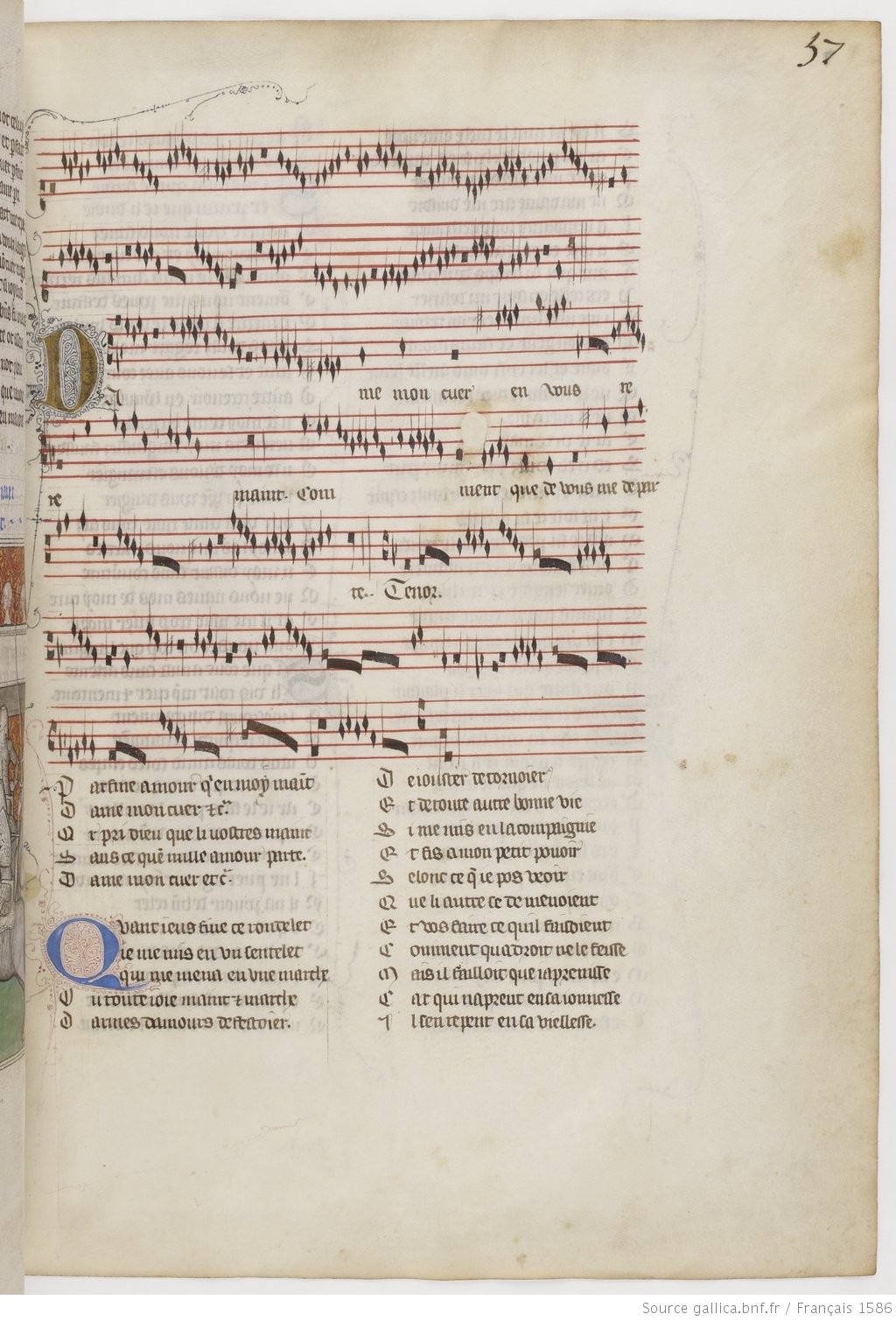 Earp, Lawrence.  “Lyrics for Reading and Lyrics for Singing in Late Medieval France:  The Development of the Dance Lyric from Adam de la Halle to Guillaume de Machaut.”  In The Union of Words and Music in Medieval Poetry, ed. Rebecca A. Baltzer, Thomas Cable, and James L. Wimsatt., 101-31  Austin:  University of Texas Press, 1991.