The plan and basic elements

The plan of the cathedral is cruciform, like many medieval churches.  At the east end (the top of the plan given below), a semicircular apse is surrounded by an ambulatory and five radiating chapels.  Next, moving toward the west, comes the choir (with two aisles on each side), then the transepts.  Following that, the nine bays of the nave lead to the west end, which contains the main entrance into the cathedral.  The western facade, as usual, has the most elaborate sculptural program, and the largest and most spectacular rose window, but the north and south transepts also have significant sculptured facades.  The two towers at the west end were completed after the rest of the cathedral.

Bruno Klein has noted that the choir is unusually short, with only three bays, which makes the nine-bay nave appear even longer by comparison.  (The cathedral of Notre-Dame de Chartres, which he uses in many ways as a point of comparison and suggests was an influence on the Remois builders) also has three bays for the choir, but six for the nave.)  He suggests the reason for this may have to do with the needs of the coronation ceremony 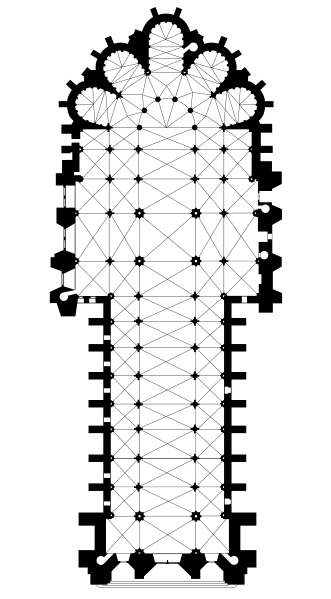 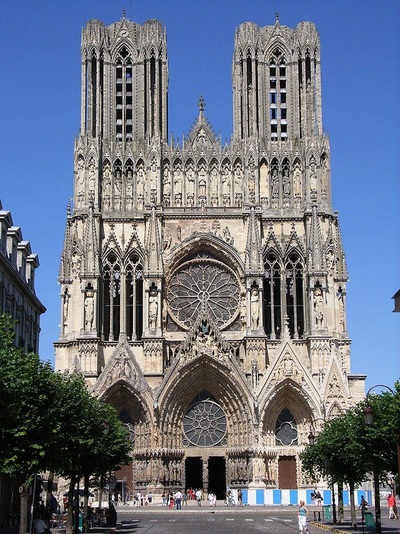 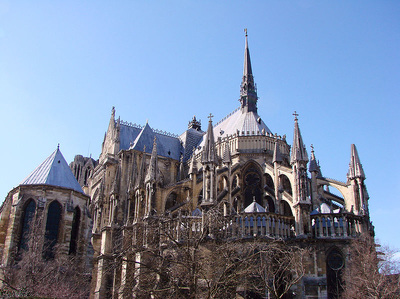 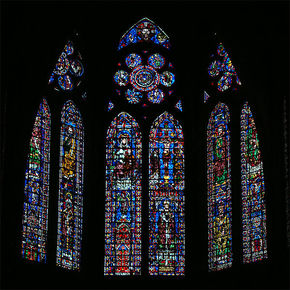 Looking at the wall elevation, you can see a standard succession of elements, with an arcade topped by triforium and clerestory.  As in other gothic cathedrals, this structure is stablized by flying buttresses, which allow for the height and light associated with this style.

Most of the medieval stained glass was destroyed over time, especially during the German bombing of the First World War.  Some of the upper reaches remain, most notably in the far east axial chapel and the rose windows.  Some of the sculpture has also been damaged, and some pieces have been replaced with modern copies to protect the originals (which have been moved to the museum in the Palais de Tau, the former bishop's palace).  Despite this damage, the cathedral remains a good example of gothic architecture and sculptural decoration, and the fact that it was constructed relatively quickly means it has a unity of style not always present.

The elements of this cathedral, as is often the case, do not only tell the story of salvation history:  they make specifically local points that would have been comprehensible to at least some of the users of the building.  This can be seen, for instance, in the stained glass in the chevet, east of the choir.  In the center, an image of the Virgin and Child sits next to one of the Crucifixion--this is standard enough, and serves to show the role of the Virgin, dedicatee of the cathedral, at two key moments, the Incarnation and Crucifixion.  Below the Virgin and Child is an image representing the church of Reims, linking the notion of Mary as Theotokos, bearer of God, with that of the Church, but specifically this cathedral.  Below the crucified Christ is his minister, archbishop Henri de Braine, who is buried in front of the high altar.  The glass figure of Henri, who is named (unlike the bishops who surround him) is surrounded by gold fleurs-de-lis on a blue background, witness to his lineage as a member of the Capetian royal house, completing the link between the relationship of Christ to his Church with that of the archbishop and his archdiocese, and its special role as coronation site for the kings of France.

The connection made in this central window between the figures of biblical history and the church of Reims is continued in the surrounding windows, which pair images of apostles above with bishops of the dioceses that made up the archidiocese of Reims below.  The bishops, according to Meredith Parsons Lillich (68), are accompanied with images of their cathedrals and placed in the order given by Henri de Braine for provincial councils.  The radial figures therefore serve as a kind of council for the central ones, extending and by implication continuing their work:  Mary/Reims and Christ/archbishop are served by apostles/bishops.  Lillich notes that there are some anomalies to this program, due in part to the city revolt that forced the archbishop and chapter into exile, a shift of attention after Henri was exiled and eventually died, and other concerns.

All images from Wikimedia Commons save the nave elevation (http://www.reims-cathedral.culture.fr/plan-elevation.html).  The drawings of the plan and the buttress view are after Viollet-le-Duc, Dictionary of French Architecture (1856).