Machaut was an important creator of narrative poetry, and he was at the forefront of the development of the lyric formes fixes as both literary and musical genres.  The intersection between narrative and lyric poetry, between word and song, can be seen in his early Remede de Fortune.  This work draws on both love narratives such as the Roman de la Rose and Boethius’s Consolation of Philosophy, which itself mixes narrative and lyric poetry.

From the earliest examples of vernacular love songs in medieval Europe, the act of writing or singing about love is as important as love itself.  Many troubadours and trouvères begin their songs by referring to their compulsion to sing, and troubadour and trouvère songs often end with a tornada or envoi or even a full stanza that addresses the song directly.  An example that does both is Jaufre Rudel’s “Quan lo rius de la fontana”:[1]

For Machaut as well, writing about love often seems more important than the act of love itself, and this can be seen nowhere so well as in the Le remede de Fortune, not least because it includes seven interpolated songs, which serve to illustrate the lover’s growth as lover, poet, and composer.

[1] Edited and translated in Samuel N. Rosenberg, Margaret Switten, and Gérard Le Vos, eds., Songs of the Troubadours and Trouvères:  An Anthology of Poems and Melodies (New York and London:  Garland, 1998), 57-58. 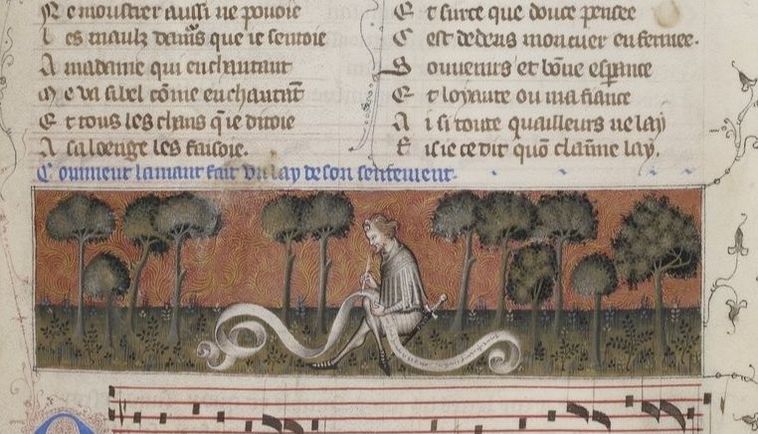 The protagonist is a young man, a poet who falls in love.  Among the other positive effects love has on him, it teaches him to write songs.  It does not, however, give him the courage to admit that he has created the lai he sings in his lady’s honor—rather, when she asks who has written the song, he runs away.  His subsequent dejection leads him to write a complainte against Fortune.

Both of these songs are old-fashioned by the mid-fourteenth century, and they each are monophonic, with a single melodic line.  The complaint in particular is so long and discursive (36 stanzas!) that it allows the Lover to wallow in his grief; its use of strophic form means that a single melody is used for each of its stanzas, creating a kind of obsessive repetition.  Indeed, the Lover himself says that his lament caused him to fall into a trance.

Hope (Esperance) arrives, to break the Lover out of this despondent state.  She not only explains to him verbally why he should not criticize Love and Fortune, she sings a chant roial, another monophonic, strophic song.  In doing so, she approaches the Lover in his own language.  Before leaving, however, Hope gives him a new song, a two-part balladelle.  This song, using the up-to-date fixed form of the ballade and the modern polyphonic musical style, provides a model for the Lover, teaching him not only how he should love, but also how he should write poetry and music about love.  For Machaut, those three things are intertwined.

The new song has its intended effect:  the Lover tells us “I’d never before heard such sweet harmony” (“onques mais armonie / si tres douce n’avoie oÿ,” ll. 2896-97), and he quickly learns its words and music.  He then writes a ballade of his own, showing his ability to master the new style Hope has taught him.

Before going to his Lady, he says a prayer, but this long strophic form is merely spoken, not set to music.  This may be because this kind of old-fashioned poem no longer has a place in the world of song.  The Lover has been converted to the proper way to love, and to write songs, but he can still pray in older forms.

When he reaches the Lady’s presence, he finds her dancing, and he joins in.  When it is his turn, he contributes his own song—a virelai or chanson baladée, another of the new song forms.  This virelai is, like many, monophonic, but its dancelike rhythms mark it as part of the up-to-date musical style, unlike the old-fashioned lai and other forms.  After this dance interlude, the Lady speaks privately to the Lover, who now has the courage to admit why he left earlier.  The two express their love for each other, and later in the day they exchange rings.  The Lover then leaves, singing a rondelet—a rondeau, the third and most sophisticated of the new song styles.

If this were an ordinary love story, this would be a good place to end:  the Lover has learned how to love properly, and his love has been returned.  He has learned how to write poetry and music in the new styles.  Machaut, however, continues the story:  the Lover returns and sees the Lady looking elsewhere, which makes him doubt.  Is she trying to hide their love from others by appearing to be uninterested, or has she already moved on?  The Lover cannot be sure where the truth lies.  The difficulty of interpreting contradictory appearances, or the potential gap between appearance and reality, is another theme that is central to Machaut’s output, so it is fitting that it should appear here, as the Lover’s final lesson.  As the Lady tells him, “a lover who does not know how to feign cannot attain great joy” (“qui en amour ne scet faindre, / il ne puet a grant joye ataindre,” ll. 4201-2).  With this reassurance, the Lover can bring his tale to an end, with only hints of later troubles, combined with a firm effort to believe that his Lady speaks the truth.

More importantly, perhaps, he has learned that hope and poetry are sufficient remedies against the sufferings of desire.  The central role of Hope to the story ix tellingly shown in the miniature in MS C where the lovers exchange rings (link to image f. 56r), for Hope stands between them, demonstrating that, as Sylvia Huot has noted, “their bond is less a mutual love directed at one another than a shared relationship with her” (Huot 2002, 178).  The narrator’s final speech, which ends the Remede, is made not to the Lady but to Love, to whom he pays homage, hoping both that his Lady loves him and that she accept his dit—his narrative poem, that is, the Remede itself.