The sculpture of the portals:  making meaning in a medieval cathedral

While the architectural plan of a gothic church in itself provides a sort of spiritual journey, moving from the main entrance at the west end to the high altar at the east through the shape of the cross, more specific stories are generally created through glass and sculpture, especially in the portals at the west end and the two transepts.  Here we will focus on the north and west ends; the south transept, which led to the bishop's palace, was private and therefore less decorated.

The north transept entrance, which was primarily used by the canons and served as part of the processional route, honors local saints and religious figures.  The smaller right (west) portal probably reuses earlier sculpture, featuring a Virgin and Child and a soul being carried to Heaven by angels, created for the tomb of Archbishop Henri (1121-75, r. 1162-75), son of Louis VI and brother of Louis VII.

The central portal has on its trumeau Pope Calixtus I, a third-century martyr whose relics were held at the cathedral; he is flanked on the two jambs by two local saints:  Remigius (Remi), the archbishop who baptized Clovis, and Nicasius (Nicaise), the martyred bishop who founded the first church on this site.  The tympanum layers scenes from the lives of both saints, along with the story of Job and the figure of Christ blessing; the whole is surrounded by figures of bishops and popes, with Old Testament high priests, on the archivolts.

The left portal represents the Last Judgment; according to Uwe Geese, this is an unusual topic for a place that was not generally accessible to the public.  (Compare, for instance, the Judgment scene in the south portal of the west end, discussed below.)  Above the judgment scenes, which prominently include a king and a bishop at the head of those being led to hell, the tympanum gives the figure of Christ showing his wounds, and the trumeau shows Christ blessing and holding an orb, flanked by Apostles on each jamb.

Geese (314) notes the connection that the viewer would make between the Christ and the Apostles here, at eye level, and the local ecclesiastical figures at the same position in the central portal:  just as the Apostles took up the work of Christ, so their work is continued by the bishops and archbishops of Reims, working under the leadership of the popes and the saints (represented by the figure of Calixtus).  This message would be sent clearly to the king about to be crowned, who would enter the cathedral from the north end, flanked by the figures of Remigius and Nicasius.

Barbara Abou-El-Haj has argued that some features of the north transept sculpture respond to conflicts between the archbishop, the chapter of canons, and the town, which infamously rebelled against its ecclesiastical rulers in the 1230s.  For instance, the insertion of Job into the life of Remi in the central tympanum, along with the focus in Remi’s life on the healing of a girl from Toulouse, emphasizes the importance of penitence, and by implication the submission forced on the rebellious town.  In addition, below the feet of Christ on the trumeau on the left portal is portrayed a local legend of a cloth merchant who cheated his clients and later made restitution before a statue of the Virgin and Child.  Here a canon looks on, showing ecclesiastical authority and reaching out as if to bless the repentant merchant. 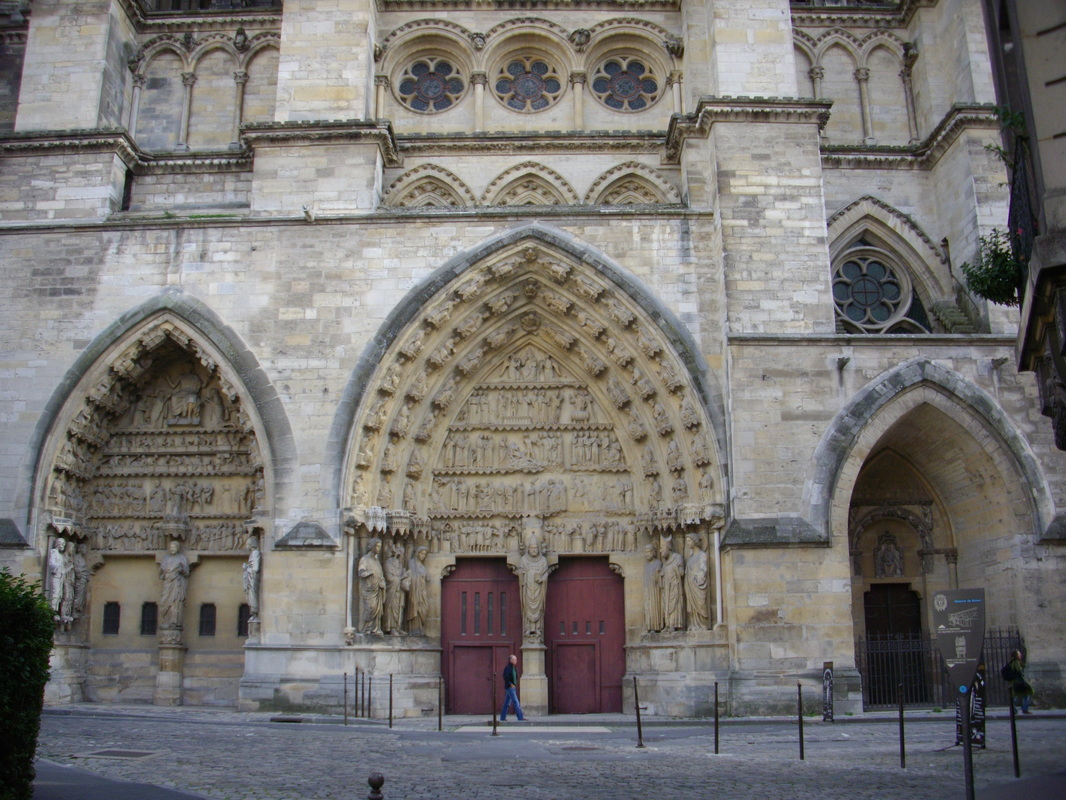 The three portals of the west end lack sculptural tympana, with rose windows instead.  (The west end is also unusual in having a particularly elaborate sculptural program inside, on the reverse facade; I will not discuss that here, but interested readers should look at Donna Sadler's book, cited below.)  The Judgment theme seen in the north portal above is echoed in the south (right) portal of the west end.  The six Old Testament figures on the right jamb are apparently the oldest surviving sculptures intended for the cathedral; they may have been part of an abandoned plan, repurposed for this location.  They are balanced on the left jamb by later sculptures of prophets and saints.  The north (left) portal represents the Crucifixion, with the Temptation, Passion, and Ascension on the archivolts and the conversation of St. Paul on the lintel. 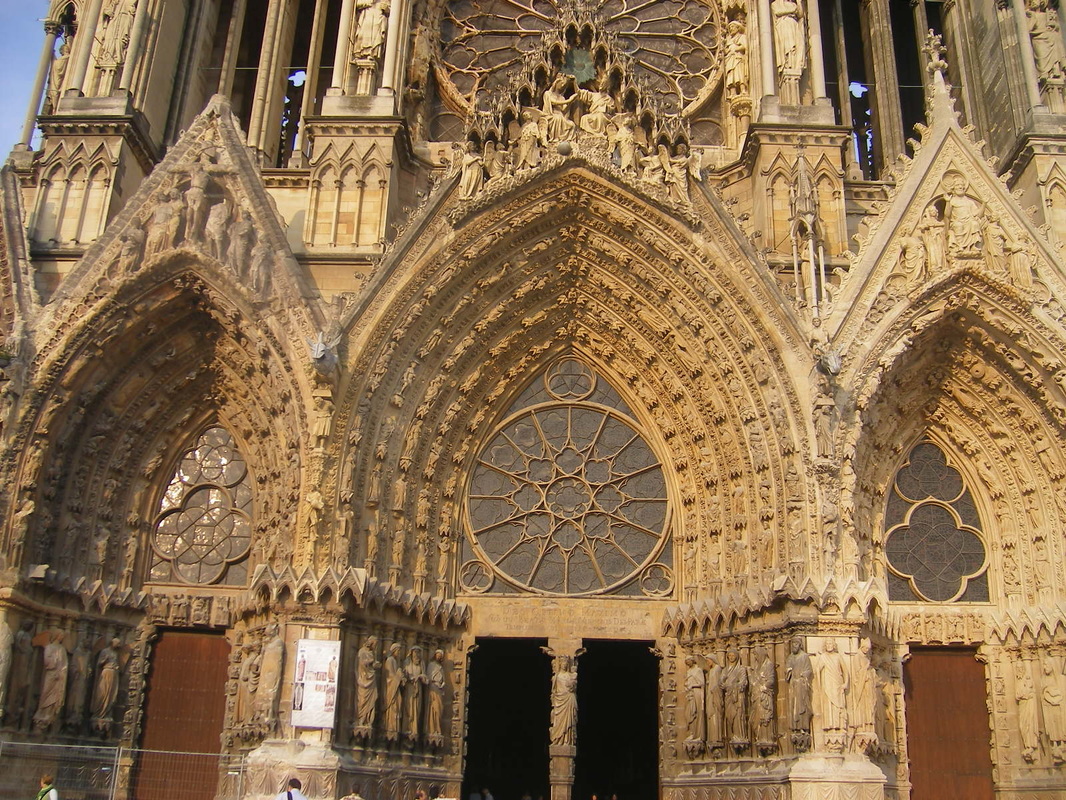