The creators and the process of construction 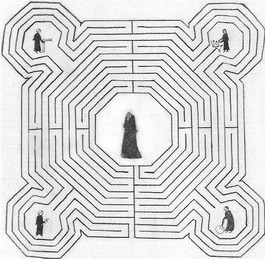 A drawing of the labyrinth at Notre-Dame of Reims, made by Jean Cellier in the sixteenth century. Image from Wikimedia Commons.
The site of the cathedral of Reims had been used as a church since the fifth century; there is some reason to believe the earliest church may have been built over Roman remnants, as was often the case, but that has not been proven.  The first church on this site was said to have been built by Nicasius (Nicaise), a patron saint of the city and a bishop who was martyred in the fifth century.  It was dedicated to the Virgin Mary early in its history.  The cathedral was rebuilt in the Carolingian period and expanded in the twelfth century; it was the fire that consumed this building in 1210 that prompted the new cathedral.

Construction on the new cathedral began at the east end and moved west in the usual manner.  It was interrupted by a revolt in 1233-36, during which the cathedral canons fled the city.  Once work resumed, it moved at a good pace:  archbishop Henri de Braine was buried in front of the high altar in 1240, and the choir was in use by the following year.  The building was fundamentally complete by the end of the thirteenth century, save for the towers at the west end.  The cathedral was damaged during the First World War, which destroyed much of the city, but it was successfully restored.

Funding for the construction came primarily from the archbishops and the chapter of canons.  An early gift of land came from Aubry de Humbert, archbishop when the new cathedral was begun.  A later archbishop, Henri de Braine (1193-1240, r. 1227-40), was the son of the count of Dreux.  The financial demands required for construction surely contributed to the 1233 revolt that drove the archbishop and chapter into exile for several years.  Nevertheless, he was buried in front of the high altar when he died in 1240 and commemorated in a stained-glass window.

A late-thirteenth-century labyrinth, destroyed in the eighteenth century but documented through a sixteenth-century drawing and seventeenth-century description, documents four architects (or masters of the works) who worked on the cathedral.  Their images are presented in the four corners of the labyrinth; it is unclear whose image appears in the center, though it has been suggested it may be Aubry de Humbert, the archbishop under whom construction on the new building was begun.  (reproduce?  Image reproduced in Robert Branner, “Jean d’Orbais and the Cathedral of Reims,” Art Bulletin 43/2 (June 1961):  131-33.)  The precise nature of the contributions of the four masters is not always clear, nor is their exact order, but the general consensus is as follows (moving counter-clockwise from top right):